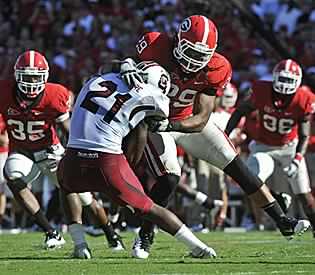 The 2012 NCAA Football season is just weeks away and our position-by-position preview rolls on by breaking down the top linebackers in the country. I cannot wait for what should be one of the most competitive college football seasons in recent memory, you can find all of our positional rankings at the links provided below, and I will soon drop my personal preseason Top 25. Make sure you check out the defensive end prospects as well, some of the players listed there could move to outside linebacker in 3-4 defenses in the NFL.

Jarvis Jones, Junior, Outside Linebacker (6’3, 241lbs) Georgia - A dynamic pass rusher and terror off of the edge for the Georgia defense, Jarvis Jones was an All-American as a redshirt sophomore in 2011 when he posted 70 tackles, 19.5 tackles for a loss, 13.5 sacks, 26 hurries and 2 forced fumbles. Many 3-4 defensive teams would be thrilled to have Jones rushing the passer on the next level and I expect him to be drafted early in the 2013 NFL Draft. One of the main reasons I picked the Georgia Bulldogs to win the 2012 BCS Championship LINK is their amazing defense, which is lead by Jones making plays behind the line of scrimmage.

Manti Te’o, Senior, Inside Linebacker (6’2 255lbs) Notre Dame - One of the most instinctive linebackers in college football, Te’o knows how to play the position and should have a huge year leading the Irish defense in South Bend. Te’o could play either inside or outside linebacker at the next level, because he is so skilled at reading the offense and being in the right place to make a play. The Hawaiian product had 128 tackles for Notre Dame last season, including 13.5 tackles for a loss and 5.0 sacks and enters the 2012 season as the eighth All-Time leading tackler in the history of the school’s respected program.

Sean Porter, Senior, Outside Linebacker (6’2 235lbs) Texas A&M - The heart and soul of the Aggies defense is the super athletic Porter, who is coming off a 2011 season where he had 79 tackles and 9.5 sacks, impressive numbers. He has yet to burst onto the national scene, but scouts are well aware of his athleticism, and note that he must add bulk before transitioning to the next level. Expect his stock to climb during the year, then make a major leap at the NFL combine, when he can put his athleticism on display.

C.J. Mosley, Junior, Inside Linebacker (6’2 232lbs) Alabama - The sure tackling Mosley is a stalwart in the middle of the Crimson Tide’s dominating defense, where he is an excellent run stuffing force for Nick Saban’s crew. He missed five games (and parts of others) during the 2011 National Championship season, but still finished with 34 tackles and 2.0 sacks, plus he had an interception in the National Title Game. He will become a leader of the Alabama defense this fall.

Shayne Skov, Senior, Inside Linebacker, (6’3 242lbs) Stanford - An intense player who lead the Cardinal in tackles as a sophomore in 2010 (84 tackles, 7.5 sacks), Skov was on track for a monster 2011 as a junior, until a serious injury suffered against Arizona on September 17th abruptly ended his season. At the time of his injury, Skov already had 18 tackles and 1.5 sacks in just two-plus games, he was likely a candidate to leave early for the NFL if he stayed healthy, and Stanford is excited to have him back healthy for his senior year. NFL scouts love Skov’s game, he is consistently behing the line of scrimmage both stuffing run plays and rushing the passer, if he’s fully healthy he will be a treat to watch.

Arthur Brown, Junior, Inside Linebacker (6’1 230lbs) Kansas State - If you follow college football, you know Arthur Brown, he was one of the top recruits in the country when he graduated high school and decided to attend Miami (Florida), he was billed as the second coming of Ray Lewis for the Hurricanes. He struggled at Miami and did not get along with then head coach Randy Shannon, and left the program to attend Kansas State, which is closer to his home in Wichita. Brown exploded onto the national scene in 2011, totaling 95 tackles, 2.0 sacks and an interception, and he looks like he has finally found a home with the Wildcats (who I think are the most underrated team in the country entering the 2012 season.)

Kevin Reddick, Senior, Outside Linebacker (6’3 240lbs) North Carolina - UNC has had no shortage of high level linebacker prospects over recent years (Zach Brown, Quan Sturdivant, Bruce Carter) but Reddick is the best prospect of the bunch, he is an athletic and rangy defender with good size, who considered entering the 2012 NFL Draft (where he was projected as a top 45 pick) but pulled out. Reddick should be able to improve his draft stock even more if his career continues at the same trajectory and could easily sneak into the first round of the NFL Draft in April with a strong senior season.

Jonathan Brown, Junior, Outside Linebacker (6’1 235lbs) Illinois - I cannot believe how many Illinois defenders have made my preview, will they really be that good in 2012, with defensive end Whitney Mercilus now playing in the NFL after being selected by the Houston Texans in the first round of the 2012 Draft? If they are a top defense, one of the main reasons will be junior outside linebacker Jonathan Brown, who put up huge numbers in 2011 (108 tackles, 20.5 tackles for a loss, 6.0 sacks, 1 interception, 1 forced fumble). He is one of the more underrated players in the country, and you do not hear his name brought up a lot on the national scene, despite being named a Preseason All-American. Brown is one to watch, he could be a household name before long.

Jelani Jenkins, Junior, Outside Linebacker (6′ 233lbs) Florida - Jenkins is a smaller, but very athletic linebacker, who probably fits best on the weakside of a 4-3 defense in the NFL. However, he also is experienced playing middle linebacker, as he was the starting middle linebacker for the Gators as a redshirt freshman in 2010. He will probably never be a first round NFL draft pick due to his lack of size, however he is very productive (75 tackles, 2.0 sacks, 1 forced fumble, 1 interception which he returned for a touchdown in 2011) and should become a leader of an improved Gators defense in 2012.

Tom Wort, Junior, Inside Linebacker (6′ 237lbs) Oklahoma - Since he arrived at Oklahoma, Wort has been a fixture of the Sooners defense and a tackling machine, starting at middle linebacker each of the last two seasons. During those two seasons, Wort racked up impressive numbers (137 tackles, 8.0 sacks, 2 interceptions) while acting as an on-field general for the Sooners defense. He is a native of England who moved to the United States as a junior in High School and quickly excelled in football, and is poised for a big 2012 season.

Chase Thomas, Senior, Outside Linebacker (6’4 248lbs) Stanford - Our second Cardinal on the list, Thomas burst onto the national scene as a potential outside linebacker prospect as a junior in 2011, when he had 51 tackles and 8.5 sacks. Thomas is a big linbacker prospect who excels at rushing the passer and looks the part of an NFL 3-4 outside linebacker. Teamed with a now healthy Shayne Skov and Trent Murphy (mentioned below) the Cardinal have two of the top linebacker prospects in the country in 2012, and should excel defensively. 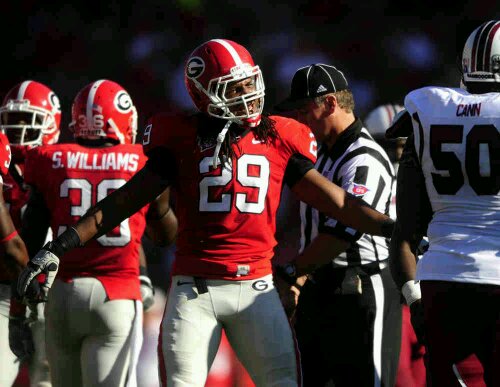